A Dire Day in Lambert’s Bay 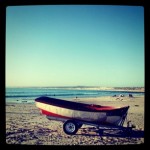 The kind of image the tourist handbooks extoll

According to its tourism website, Lambert’s Bay is known as the diamond of the West Coast, and the crayfish capital of South Africa. Whilst I don’t have enough crustacean-related expertise to assess the second point, I can guarantee you that diamond is a word that could not be accurately bestowed upon this bizarre little town.

Tourist brochures had me envisioning some sort of culinary utopia, complete with long, leisurely sunsets, spent sipping wine and munching on all manner of marine goodness, but, sadly, the Cederberg marketing department has a slightly tenuous handle on reality. Some of the more dubious honours they failed to mention in their marketing collateral were the existence of two giant potato processing plants, which cast unseemly shadows over the unspoilt beaches, and the omnipresent stench of gannet poo, which permeates the town with a pungency that has to be experienced to be believed. 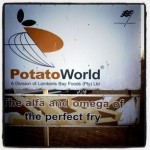 Nonetheless, I was quite optimistic about Lambert’s Bay’s dining options, having heard tales of the legendary Muisbosskerm and believing, like all Capetonians, that small towns should be overrun with charming little restaurants and coffee shops, gagging to provide out-of-towners with an authentic local experience. Rookie error.

The reality of the culinary landscape, revealed rather harshly in a short and slightly frightening walk around the town, is that Lambert’s Bay’s population is, in fact, most partial to bar food and hard liquor, with the town’s many MANY sports bars filled to capacity with a rather dire selection of humanity, all sporting varying levels of balance control. 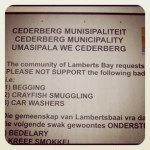 Did I mention that it's a strange town?

Unnerved by the prospect of travelling the 238km back to Cape Town with a brandy hangover and a belly full of what I could have acquired at a local Snoekies (no disrespect to them, but that’s a seriously long drive), I ducked into the local KwikSpar, another hotbed of iniquity, practically pleading at this point for some culinary guidance. 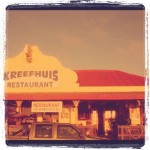 I was directed to Die Kreefhuis, a small, aptly named seafood jaunt that boasts a distinct country house charm and sweeping sea views – I could practically hear the hallelujah choirs singing as I walked through the door. Die Kreefhuis was the first restaurant in the area to serve whole crayfish, and must have been what inspired the mystical moniker of ‘crayfish mecca’ that is so enthusiastically reinforced throughout the town’s tourist literature.

A bright shining beacon of hope in what was becoming a bit of a dire day, Die Kreefhuis was everything I was looking for and more, with exceptionally friendly staff, who traipsed around the restaurant armed with smiles and heaped platters of mouth-watering seafood. I ordered one of said platters, complete with a healthy portion of grilled linefish, a handful of calamari and a simmering pot of cheesy garlic mussels. 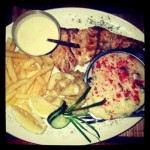 The food was exceptional across the board – the Cape Salmon fillet was cooked to perfection, the calamari oscillated beautifully between crispy and chewy, and the mussels – ah the mussels – were a cheesy mound of heavenly goodness. Honestly, if I had drowned in a vat of that mussel sauce I would have died a happy man.

All of this loveliness for well under 100 ront! So much loveliness, in fact, that dessert was simply not an option, with my stomach now a veritable aquarium of delicious former residents of the nearby Atlantic Ocean.

The day in the bay was saved by the wonderful service and delectable fare at Die Kreefhuis. If you’re ever thinking of visiting Lambert’s Bay (and I highly recommend that you don’t), you’d be well advised to visit this little gem, that truly is a rose amongst the thorns.

(In other news, I have heard that Muisbosskerm, just outside of Lambert’s Bay, is absolutely and utterly incredible, but I feel one has to be in a special kind of mood to be able to knock back ten courses of food).

Die Kreefhuis has not yet made its way onto the World Wide Web, but if you’d like to make a booking, you can contact them via electronic mail on kreefhuis@wam.co.za 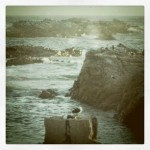 Some of the chief offenders in Lambert's Bay

8 Responses to A Dire Day in Lambert’s Bay