Generally, when I think about Mexican cuisine, I tend to envision plates of cheesy, greasy nachos and tequila-soaked, sombrero-clad party girls screaming ‘Olé’ whilst swaying unsteadily from the bar counter. Whilst these types of margarita-infused nights of madness certainly have their time and place, I’ve been led to believe that Mexican food is about so much more than guacamole, salsa and blinding José Cuervo hangovers.

One of the city’s newest eateries purports to provide a more authentic Mexican experience, so I set off on a mission to explore exactly what such a thing entails. My journey of discovery took me to San Julian, an unusual little establishment, tucked away in a lower corner of Rose Street in De Waterkant. From what I’m led to believe about Mexico (and this is purely based on what I’ve deduced from movies and various, racially offensive Taco Bell adverts), this seemed like the genuine article. The restaurant feels a bit like a time capsule, with crosses adorning the walls and an air of small-town homeliness infusing the place with charm. It’s run by the delightful Garcia family (such fun to say in a Spanish accent – Gartheea), who have mastered the art of multi-tasking – they provide a hands-on entertainment experience that involves dress-up, singing, drinking and, at various intervals during the evening, eating.

These are some of the things I learned about Mexico and its cuisine after my evening at San Julian:

Despite what the adverts might have you believe, Mexicans are not mad for Big Korn Bites. They will, however, endorse them for money. Our waiter was, in fact, the star of the most recent commercial for the chip brand, having been discovered through some sort of casting system that clearly involved a fair degree of racial profiling. Kudos to Big Korn Bites for going the extra mile to find the genuine article. Minus points for them being unable to convince their primary brand ambassador to actually endorse them with any sort of conviction. “Disgusting!” was, in fact, the adjective used by our very lovely waiter to describe his feelings towards South Africa’s clearly inauthentic take on the nacho chip.

Turns out Mexicans are not immune to the charms of their wildly popular export drink. As the night went on, things got progressively rowdier as the margaritas started to flow. Out came the sombreros, the Mexican wrestling masks (more on this later) and the guitars, and our hosts got livelier by the minute, putting on quite the show for their initially confused, and later, slightly shit-faced clientele. San Julian is an experience of note, with food taking a bit of a backseat to the various forms of entertainment that are peddled through the restaurant during the course of the evening. 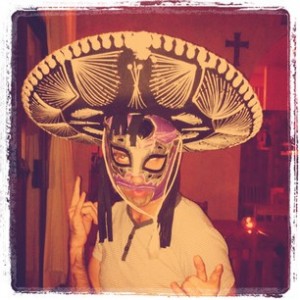 The difference between Mexican wrestling masks (think Nacho Libre on crack) and S&M attire is virtually nil. Add or subtract a few colourful tassles here and there but essentially, they’re the same thing. I was halfway through my slightly bland taco when I was accosted from behind and adorned with one of these delightful pieces of headgear. With tequila swimming happily around your belly this seems utterly hysterical, and, as more and more of these elaborate masks are whipped out and placed on unsuspecting patrons’ heads, the place begins to look like it’s readying itself for some sort of mass orgy. Whilst this was immensely fun at the time, the pictures the next day paint a rather disturbing picture. 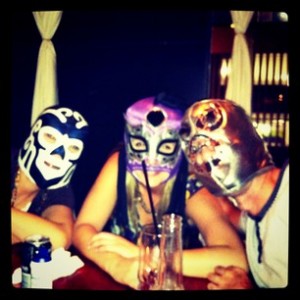 4 – Guacamole should never be underestimated 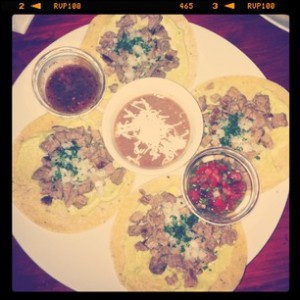 Whilst there was nothing inherently wrong with the meal I ordered (the Taco de Carne Asada, or tortilla with barbecued meat, guacamole onion & coriander), it was rather lacking in flavour and originality. Which is a pity, because, as I was chewing on what felt like nothing in particular, I was very aware of the fact that I was downing, and not particularly enjoying, an afternoon’s worth of hard work. All corn tortillas are made in-house, and freshly prepared each and every afternoon. I so badly wanted to enjoy the meal but, despite beautiful presentation, it failed to make any sort of impression on my tastebuds. The meat was under-spiced, the refried beans soupy to the point of being unnerving and there was a noteable shortage of guac, which I feel might have been able to save the day.

San Julian is a fantastically vibrant and eccentric spot that offers diners a truly original and unique experience. It’s less about the food than the vibe, and is definitely a place to which I’d return, although possibly just for drinks next time. The margaritas come very highly recommended and, whilst slightly expensive (just under R40), they do the job in double-quick time, and will be sure to reduce you to a singing, mask-wearing deviant in next to no time.

My next trip down Mexico lane takes me to the effortlessly chic Twitterati favourite, El Burro, for a glorious dose of goaty goodness. Stay tuned. 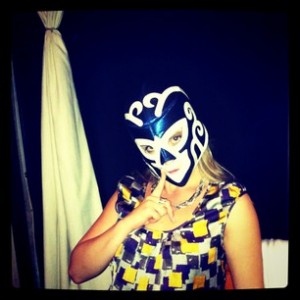